A preview (almost) of the new cover! 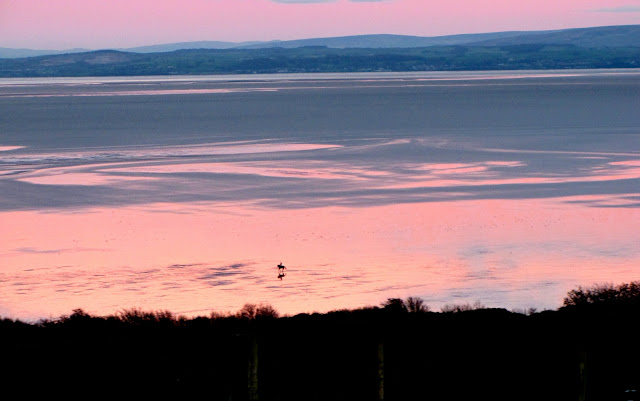 All being well, we hope to publish Moon in Leo early in 2011. Hopefully we can launch it in spring time. We now have a designer who will probably base the cover on this photo. On a recent visit to Furness to see and photograph the settings in the book, something amazing happened. Having got good shots of the Leven Estuary and Chapel Island (posted earlier) we visited Birkrigg Common and the Stone Circle, then went in search of Urswick Tarn. As the sun was setting, we decided to take one last look at the estuary: I had wanted to see it with the tide out, as several important scenes take place on the treacherous but beguiling sands. We found a lane that went down to the sea, but stopped near the top. I climbed the high bank with my camera and I was transported straight back in time to Rosamund's world: no modern buildings were visible in the twilight, and onto the sands emerged a single rider, joyfully cantering her horse into the shallow waters that remained near the shore, but dwarfed by the immensity of the sands.

It seemed as if Rosamund herself were present- perhaps she had used her alchemical arts to come to the future and give us a sign!
Posted by Connie Jensen at 03:17